More about our history and manual book binding from the last century to today in the book.

LAFKA 75 vuotta. Available from us for 25 euros + postage and handling fees. 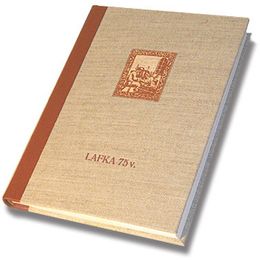 Bookbinding by hand for 90 years

Kalle Hermanninpoika Jokinen was born on February 14th, 1874 on the Pienmäki croft farm, which was on the estate of Jok’haara in the municipality of Uurainen, where he also spent his childhood. His parents were Herman Matinpoika Jokinen and Wilhelmiina Gabrielintytär Henriksson. When he was young, Kalle worked as a shepherd and farmhand until he moved to the city of Jyväskylä in 1890 and became the apprentice of master bookbinder Aapeli Pellikka. According to a certificate given by his master, a young Kalle Jokinen had come to be an apprentice of the bookbinder on January 18, 1890. Four and a half years later, on July 31, 1894, to be exact, he received the following certificate from master Pellikka: “Has behaved politely and with integrity in every way, and made excellent progress in his work; for this he is now being given this certificate.” Kalle continued working in Aapeli Pellikka’s shop as a journeyman and received a new certificate on October 15, 1894, which states the above and also: “he has done his work with skill and diligence and is now free from my service”.

After this Kalle went to Helsinki. After staying his first night at a Salvation Army shelter at the corner building of Pursimiehenkatu street, he began working for Kirjansitomo Julius Lindfors on October 18, 1894 as a journeyman bookbinder. There were three journeymen in the bindery. The Lindfors’s were gentlefolk who rarely associated with the journeymen. Working hours were from 7 am to 8 pm with an one-hour lunch break. The wage was 1.20 marks per day. After six months he was hired by master bookbinder Algot Laurent, where he enjoyed himself and worked for nearly 17 years, receiving good certificates: in the last certificate he is named bookbinder and is reported to have worked as a gilder. (His son Elis and Väinö were also later taught by the elder Laurent.) Kalle worked for a few more binderies before he established his own family company named Kirjansitomo V. & K. Jokinen on June 5th, 1928 with his oldest son Väinö. Väinö had already started working as an independent binder in the late 1920s in Helsinki on Ullanlinnakatu street.

Kalle was awarded the title of master bookbinder on December 13, 1949. He worked in Lafka for 43 years until his death on December 13, 1960. That means his bookbinding career lasted a total of 70 years – he worked until he was 86 years old. In addition to his regular jobs, he did binding work on books which could not be taken outside of the bank; where the work had to be carried out in the evenings and weekends inside of the bank.

Kalle Jokinen’s sons Elis and Väinen followed their father into this trade, and it was indeed Väinö who was one of the founders of ”Lafka”, which is what we call our bindery. In those days, Elis still worked for Gummerus in Helsinki. Lafka could not initially afford to employ both sons, but the plan was to have Elis work there later. However, the economic recession of the 1930s struck our new business hard, as it did for all of Finland’s industries, and it resulted in a giant wave of unemployment in all industry branches. At that time, Elis worked in the bindery of Yhteiskirjapaino as a gilder. Gold platers have always been the highest paid tradesmen, so when it became necessary for the company to downsize, Elis Jokinen was the first to go. One of the justifications given for the layoff was that “your father and brother have their own bindery”. Elis worked at Lafka whenever they needed additional help. The recession gradually eased and Lafka’s facilities were expanded. However, the Winter War, which began in November of 1939, halted these plans. The Winter War stopped Lafka’s operations for a while. Väinö was killed on February 25th, 1940 in Pitkäranta. Kalla managed Lafka after this. Elis began working as a master bookbinder in 1942 for the bindery of Oy Weilin & Göös, later for its subsidiary Oy Paragon Ab. Elis helped out as needed in the evenings at Lafka together with his bookbinder wife Herta.

After the war of the 1940s there was a shortage of work materials and ingredients. When personnel of the University and government ordered the binding of a large number of books, Lafka needed to make several requests to the rationing committee to get a special permit to purchase eggs, flour etc. These ingredients were need to make paste and for gilding the edges of the pages of books. Lafka got these permits and were able to continue binding books.

On February 12, 1945 Elis became a part-owner of Lafka and became a full-time employee until his death in 1960. In addition to this he served as a part-time instructor of bookbinding courses at the bookbinding school of Helsinki. The early 1960s were a time of great change. In early 1960 Kalle Jokinen became weak and needed to go to a hospital, where he also died. In August of the same year, Elis died of meningitis. Ownership of Lafka was then tranferred to Elis’s widow Herta Jokinen and their son Olavi Jokinen, who had been employed elsewhere at the time. It was time to look for a new supervisor and they found bookbinder Toivo Salo, who had been Elis’s student in the bookbinding school of Helsinki, and had learned more about bookbinding in evenings at Lafka. He became a part-owner of Lafka and the third partner. He later also earned the degree of master bookbinder. Lafka had an excellent reputation as a skillful operator and had a large number of loyal customers. Its financial position was stable and its staff was competent. It was safe to start a new era in Lafka’s history.

In the early 1970s the work week was changed to 40 hours, and Saturday became a day of rest. We also closed our doors at that time, although in the beginning the doors were opened quite often. The lights at Lafka came on at 6:00 am and stayed on until 7:00 or 8:00 pm. In 1977 Herta fell ill and Olavi Jokinen’s wife Varpu came in her place. In 1980 Olavi Jokinen became a full-time employee of Lafka.

In the early 2000s preparations were made to celebrate the 75th anniversary and Olavi Jokinen wrote Lafka’s history. It was discovered that time had even “modernized” Lafka a little bit, and in 2003 we made our first website. In 2007 Lafka’s operations received a fourth generation when Vesa Jokinen left his previous job and became a full-time employee of Lafka and part-owner of the company. He had worked at Lafka as a clerk for several decades, so he was familiar with Lafka’s operations.

The decade of 2010 began sadly. After working at Lafka for more than 30 years, Olavi Jokinen fell ill and was hospitalized in 2011. His wife Varpu Jokinen, who had also worked at Lafka for more than 30 years, also got sick the same year and died in the autumn. At that time Vesa’s wife Tuija Jokinen became a employee of Lafka. For several years we had looked for a new bookbinder to be an apprenticeship student of our bindery. In the autumn of 2011 a young man named Tomi Lappalainen entered our bindery to buy a bonefolder, which he needed as he studied to become a conservator in Metropoli. His shopping trip turned into a job interview, and a few weeks later he was an apprentice at Lafka. Now two years later he has graduated as a bookbinder, become a part-owner of Lafka, and started his studies to be a master bookbinder under the supervisor of master Toivo Salo.

With our great employees and a loyal customer base, we are confident about the future. In 2013 we turned 85 years old, and all of this time we have been operating in the same premises, on Tarkk’ampujankatu street in the Ullanlinna neighborhood of Helsinki. As you can see, Lafka has been a small family run company and that’s the way we want to keep it! There is a saying that “a bookbinder loves books more than money”, based on Lafka’s history we can truly say that this statement is true!

We thank you for your interest in learning about Lafka and its people. Come visit us!